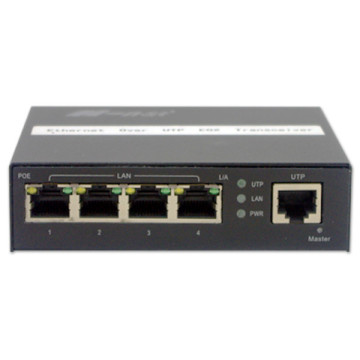 At the same time, with the development of high-definition TV, broadband Internet access and other services, EoC equipment needs to provide higher bandwidth to support Radio and television operators' subsequent business expansion.

N-net model NT-ENU4100 Ethernet converter is an UTP cable converter. One UTP transceiver at the remote end can support one or multi IP network devices. This EO2 can transmit over telephone line, Ethernet cable, and twisted pair. With the Ethernet extended to 750meter, it has enlarged the Ethernet network application area, cutting down the project cost by using Cat5e or Cat6 cable.

From the perspective of technical subdivision, various EoC subdivision technologies coexist in the market, mainly including HomePlug, HomePNA, Moca and down-conversion WiFi. Among them, HomePlug technology has the highest stability, the cost of bidirectional transformation is lower, and the physical layer The rate is higher, so its application is also the most extensive.

N-net model NT-ENU1400-AF/ AT series is the EO2 with power over Ethernet function, powering remote Eo2 transceivers and their connected IP network device, default as a master terminal.

Shenzhen N-net High-Tech Co.,Ltd
N-net Technology Co., Limited is one of the powerful and Hi-Tech companies specializing in the integration of R&D, manufacturing and marketing of optical fiber communication and Security solution. The main products include: commercial/industrial fiber media converter series, commercial/industrial fiber switches, GEPON series, fiber video converter series, EOC series and the security monitoring core system, etc. Since the establishment in 2001, N-net has built its reputation in the high quality of products and services, and the leadership in innovation.
Company Info
Email to this supplier